On a recent January day, the weather was warm and the fish were biting. My friends, Don Flynn, Ron Hurley, and his neighbor, Erica joined me in a fun day of fishing near Seldovia. We snacked on king salmon and king crab sandwiches in between taking turns reeling n king salmon from nine pounds to one white king that went over twnety pounds. Here’s a photo of the catch with Ron, Erica, and me. Also, fishing with us that day was Boop, aka Don Flynn, who used to own and run the Diamond Cape. Boop is now back to salmon seining in Prince William Sound, which is what he did before the Exxon Valdez disaster. Erica enjoyed the experience of fishing with three captains, and with the fish cooperating, there was plenty to do between snacks. 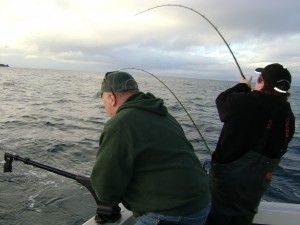 Boop reels in a king while Ron cranks the downrigger

It’s not often that I get to take two kings home in a day, but this trip was very rewarding. Erica and her Dad smoked some of the king that they took home and a few days ago, Dr. Bill brought me some all smoked and packaged up. I have sampled some and it was delicious.

The Julia Lynn will be out of the shop and back in the water in a few days and I can hardly wait to get out there and see if we can’t get them to bite again!