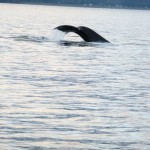 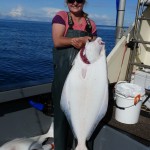 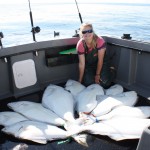 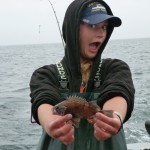 We have had a good week here in Homer. Not only has the king salmon fishing been excellent, the whale watching for Humpbacks has been nothing short of spectacular. They seemed to have gone from a phase of many breeches and flipping to a more serene feeding and deep-dive fluking of late. Jona got a few good shots in while I was maneuvering to avoid these huge mammals as our clients enjoyed the show. We both agree that the best thing is to just get a good look and capture the image in our “minds eye”, as you tend to miss alot while trying to get a photo. I appreciate her efforts so that we might share some with you all.
Today we had only three clients, so we both got to fish for halibut. I must admit to getting pretty well wupped by the first mate. Jona landed a dandy sixty pound halibut and followed up with one over thirty pounds. Together, we produced over sixty pounds of filets for the winter.
The highlight of the day (and we had a good one) was that one of our clients, Chris, hooked a salmon shark that was over eight feet long and must have weighed over 400 pounds. He battled the shark for an hour and we got some great video to prove it. We were about to cut the leader when it broke off. It was decided early on to release the fish. As soon as I figure out how to post it to YouTube, I will.
We topped off the day with an all-you-can-eat Prawn dinner at Captain Patties. The perfect end to a perfect Fall day…..well, maybe an afternoon milkshake would have made it better. 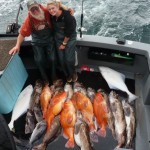 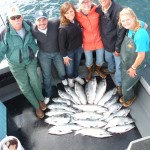 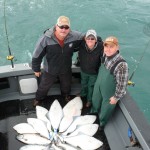 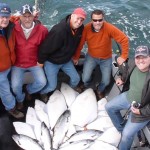 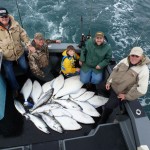 First photo was our annual trip to the ling cod grounds for some freezer fish. Team HaberVision (Steve and McKenzie), Bruce Lozekar, Randy Clifford, and Jona and I headed out to Gore Point for some good ling and yelloweye action. We filled the box along the way back with a few more black rockfish and beat the wind into Homer. Next photo is from the salmon.halibut combo that Olivia and Ben (Jona’s friends from Minnesota) went on with us. Silvers were hot that day. The other photos are from this weeks combos off Anchor Point for halibut and king salmon. The whale watching was good, too. Am hoping that the fishing remains good throughout the month. Will keep you posted as time allows. 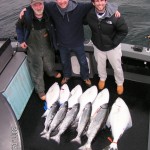 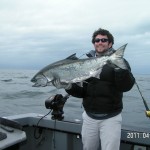 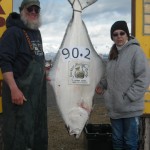 The fishing for king salmon has been very good lately here in Homer, Alaska on the Kenai Peninsula. This is the time of year that we are able to target the kings around the bait that is coming in the form of hooligan and herring that are arriving to spawn. These are fat fish and very good eating. I had the pleasure of taking the “Gorton’s Fisherman” (their head of marketing) and his son last week and we caught some dandy kings. Rick actually gave me one as he said that “I had exceeded his expectations as far as how much they would catch!” I was so happy to accept a fresh king to bring home to Debra. On Sunday, May 1st, we had six people out on a halibut trip and since it was the opening day of the Homer Jackpot Halibut Derby, I encouraged everyone to buy a ticket. My intention was to target the area where we had tagged the fish for the derby just a couple of weeks earlier. Well, fishing was slow in that area, so we moved out toward Point Pogibshi a bit and anchored in 200′ feet of water. The fishing was difficult in the current with 3# of lead, but we were catching halibut, our target. Jean Manson hooked a fish that was heavy and after a good battle, we boated a 90# halibut that made her the leader in the ladie’s division of the derby for May. Not sure it will hold up, as May brings some big fish, but it was fun to see her standing next to her fish. 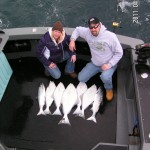 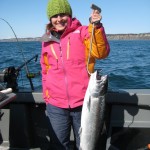 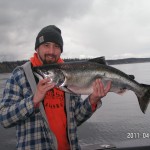 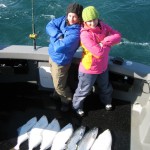 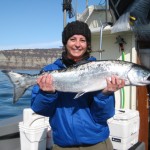 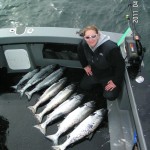 The last couple of weeks of April proved to be some of the best king salmon fishing of the year so far. We had some awesome days fishing out near Seldovia this winter, but the fish caught in the last couple of weeks seemed to be a larger average size. It was great to see so much success in the fleet and the “Julia Lynn” got her share. The most memorable for me was the 25# white king that I set the hook on and let someone reel in for me. I did trade it out for a smaller fish in the end, but that was a nice way to end the day! We have had a good group of folks come and fish this Spring and there is nothing that makes me happier than seeing a smile on an anglers face when reeling in a king salmon. Thanks you Lauren for sending me photos of your trip…..this is always appreciated. It is hard to steer and net fish AND take photos. 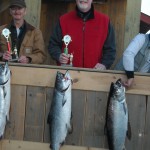 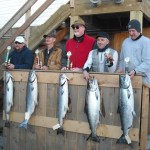 The “Julia Lynn” competed in the 2011 Winter King Salmon Tournament in Homer on March 19th. Tom Hyatt from Anchorage and three friends and associates chartered the boat and set out for a fun day on Kachemak Bay. Spirits and hopes were high and the weather couldn’t have been better. We trolled the bluffs for six hours to no avail. There were a bunch of fish called in by 3PM, over 100 and we were chewing our nails. Then at 3:10 PM, just 50 minutes before the end of the tournament, #4 rod went off. This had been Tom’s rod all day and all four anglers were poised to take a rod and clear the deck. The crew never gave up and we were in it till the end. The fish was a beauty and swam into the net and onto the deck. It was buried in ice before anyone could even take a photo. It weighed in at 25.6# at tournament headquarters located at Coal Point Seafoods (www.welovefish.com) and ended up being third place overall for the day. The one side-bet that the guys had made, the $100 category got swooped up by the #1 fish (30#), so just the 3rd place money was awarded to Tom, but that totaled $9460, so he had a good day. For the crew of the “Julia Lynn”, myself and Sadie Mumma, the day was an enjoyable one with four attentive anglers just out for a good day on the water.